The Dresses by Tae Gon Kim. Image by DNSW

The Dresses by Tae Gon Kim. Image by DNSW

Oh May. The coats are out and the long days of summer are gone. Leaving work when it’s already dark, and you haven’t even had to work back late, is pretty depressing. That’s where Sydney steps up its game.

Vivid Sydney. When the entire city lights up after dark. We’re not just talking about the light installations. Back for its seventh year, the festival of Light, Music and Ideas takes place from May 22nd until June 8th, with events right across the city.

Here’s our guide to a few of the highlights: Check out Life Story, by BBC Earth and Spinifex Group Image by DNSW

The Sydney Opera House’s sails may be the canvas for one of the world’s most impressive light shows each year, but the performances inside the concert hall are pretty specie too. Local and international names will take to the stage – Daniel Johns, Flume, The Drones, The Preatures, Sufjan Stevans, Astral People and TV on the Radio to name just a few. If you want the full list, you’ll find it at vividlive.sydneyoperahouse.com

Dinner with a view A view of Vivid without the crowds at Aqua Dining

Restaurants around the Harbour get to bask in the glow of Vivid’s light shows – so don’t be surprised to find special menus for the duration of the festival. At Aqua Dining, a seat at the table for the special Opening Night degustation will set you back $125 per person and is the perfect way to ensure you see the official Lighting of the Sails on the Opera House without having to battle the crowds down at Circular Quay.

The name may be a mouthful but this event is too tasty to miss. The big guns in Sydney’s dining scene will join forces down at Carriageworks for a few nights of Italian disco and Fratelli Paradiso, Da Orazio Pizza, 10WilliamSt and Icebergs Dining Room and Bar will provide the food. Italy’s disco legends will provide the music. Except for two very special nights – on Sunday 31st May and Monday 1st June, when Grace Jones will be performing for Modulations at Carriageworks. These are two nights not to be missed.

From Trees of Light to giant illuminated dolls, the Light installations that take over the streets, stairs, laneways, buildings and waterfronts around Sydney are set to bring crowds from all over the world. This year the event extends out to Pyrmont, Chatswood, Chippendale and the University of Sydney. Our must-see pick for this year’s festival is down at Kendall Lane in The Rocks. The Dresses by French artist Tae Gon Kim is a beauty, ephemeral piece that sees fibre optic light strands swirl together to create The Dresses. Three dresses to be exact. Inspired by French philosophy on love, the pieces are simply stunning and remind us a little of Cinderella’s ball gowns. Who said fashion wasn’t high art? While you’re in The Rocks, swing by the Argyle Street tunnel, which has been transformed by the BBC and Spinfex Group. The dulcet tones of David Attenborough and footage from the BBC bring this space to life. The Star knows how to put on a show, so when there’s a light show on around town, they’re ready to party. Vivid Lounge at Sky Terrace will take over The Star’s rooftop – our bet is the light beam karaoke experience will be a huge hit. Karaoke on steroids – sing your heart out and have your performance beamed up outside The Star Event Centre.

Sky Terrace at The Star
80 Pyrmont Street, Pyrmont NSW 2009
6pm til late
Open to all ages throughout Vivid
star.com.au

Get Fit For Free This Week Only! 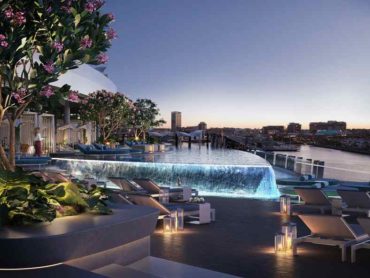