The winter ice rink at NYC’s Rockefeller Centre is iconic. That big Christmas tree, a vast ice rink, children in adorable mittens, scarves, hats and a blizzard of coloured puffa jackets. Well, The Greenwood Hotel isn’t quite at that scale, but it’s celebrating Christmas in July, and it is a heck of a lot of snow packed fun.

The first thing that greets us is a giant snow dome which graces the front courtyard. It’s transparent panels are gleaming in the sunlight (yes, we did have a few minutes without rain!).  Inside its warm, toasty and…. oh ‘helllooooooooo” the sound here carries an echo, so yodel away.

A musical duo near the entrance are sitting on high chairs, one strumming a guitar and another belts out cover hits which instantly communicates a warm welcome to come in and rug up and get ready for action!

Two hundred tonnes of snow have been shipped in to create a winter wonderland. An inflatable Mr Snowman is about 4 metres tall sitting on small mountain of snow (that’s how it appears to a 5 year old) Upturned skis are lined like garden stakes, a chair lift is buried in the snow and wooden signposts direct us to ‘ski school’, ‘Zermat’ and ‘Thredbo’ Some of the kids are picking up snow for the first time.

The 20m ice rink is situated towards the back of the Greenwood behind white picket fences and sunny yellow and white striped umbrellas. We scan a barcode and sign away liabilities with a finger stroke. Next up is the challenge of ice skate selection! Wot no laces? Technological advancement of rental skates means there are no laces to tie up just a ratchet system.

As we start to enter the ice rink, two white goddesses with perfect Disney like ice skates, fishnet stockings and sparkly bras enter onto the ice. The show is about to begin and its all fire and ice and a lot of flame as the girls spin, twirl and dance with fire poys, batons and the finale of fire breathing.

Now to step back onto the ice after that takes a certain amount of bravery and self depreciation. It’s not going to be pretty. We won’t sugar coat this, skating on Glice is hard if you are used to normal ice. It’s the equivalent of an ice skating hippo combined with the first day at kindergarten vibes when you can’t let go of a stabilising force, this could be the side of the ice rink or your mum! Help is at hand with friendly sliding plastic dolphins admitidly this is for kids but at this point, pride is out the window and the dolphin is looking like a very good option.

After exercising up such an appetite the Greenwood has laid on specials of poutines, fondue and creative cocktails using a number of spirits. Our favourite is the Sheepdog peanut butter whisky which sounds weird but the espresso is deliciously smooth and has a creamy oily mouthfeel.

Almost everyone at the bar is ordering pizza. So do we! Served on a wooden board, it’s a delight with a crispy thin base, topped with a light tomato sauce, chorizo slices, big juicy prawns with an arty drizzle of saffron aioli. It’s so good that when the buzzer goes off for the rest of the food, we ignore it and keep chomping The schnitty is a good one. A butterflied chiken breast is made in house with tasty herb and breadcrumb coating. It’s golden, crunchy served with a roast chicken gravy over the top and a mound of creamy slaw. The crispy duck is better than your average salad with lettuce, baby chard, mandarin, spiced walnuts, red quinoa, pecorino and a tasty miso dressing. Barbequed slow cooked Saigon BBQ Pork is unctuously morish squeezed between two buns with a zingy dressing of coriander, pickled veg, cucumber, nuoc cham, soy mayo & crackling. Just add a few shoestring fries and we are happy penguins.

So don’t delay, get your skates on (literally) as the festival lasts till the 30th July! 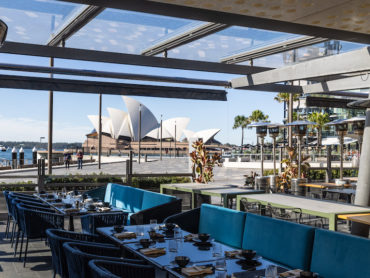 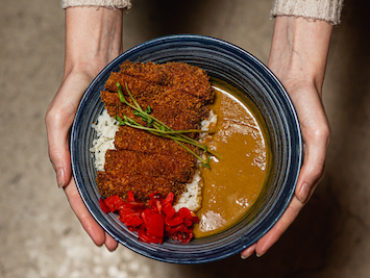 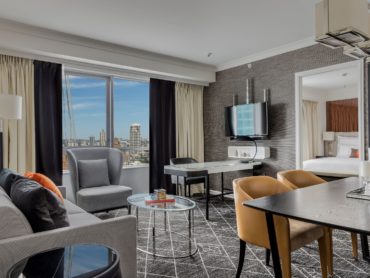 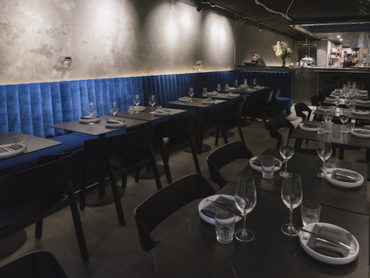 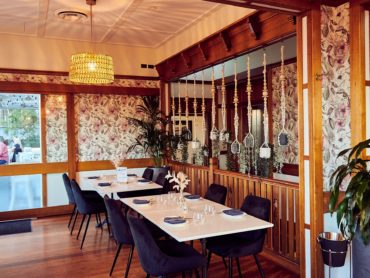 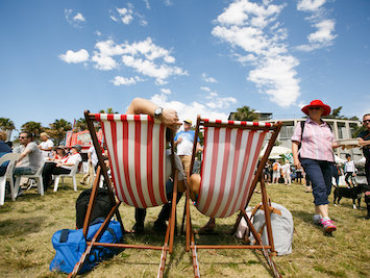 The Pyrmont Food & Wine Festival is back with a bang and celebrating it's 10th birthday, the locals have gone all out!