We love street food, especially when you don’t need to eat it in the street with its hazards of hungry mobster birds, being run over by an Uber Eats cyclist or a handbag oil slick from burger sauce.

So when two Turkish mates, Efe and Ozgur both from Istanbul (but met in Sydney) join forces to launch their first restaurant together we suspect a lot of fun is ahead. Between them they have experience with a number of hospitality brands; Four Seasons, Hyatt Hotels, and The Marriott along with Factory Grind in Surry Hills.

On a cold Friday night, the rain is pouring and Clarence Street is pretty quiet, yet there is no missing Above Par, whether its the elevated street position, the warm glow from its all glass frontage or its socially distanced but buzzing dining floor.

The menu covers all the bases. We start with all three dips; hummus, eggplant mutabal and chili labne. Each arrive in beautiful blue glazed bowls with the dip in the centre, a moat of olive oil and dusting of smoked paprika. Its hard to stop traffic with hummus, we’ve all had it a million times, but this version is rich in flavour, seasoned, and the texture is so creamy its like dunking fluffy pillows of homemade Turkish Bread into marshmallow dip.  ‘Smalls’ kick off the fun with toasty falafel rolled in sesame seeds on a bed of hummus and artful swirls of green tahini. However, it’s the pea and feta fritters with yoghurt which get our vote. Crisp on the outside and packed sweet savoury textures.

We get our market stall fix of gozleme and cacik (yoghurt with cucumbers and herbs) and order both options of spinach and feta along with sucuk, haloumi and kasar cheese. They arrive stylishly presented like a parade of soldiers, the crisp delicate dough contrasting with some punchy fillings.

Vegetarians are well looked after with a morish bowl of roasted cauliflower, sweet potato and chickpeas or try the surprisingly uncheesey triple cheese shaksuka – a roasted half of eggplant stuffed with hummus, mozzarella & haloumi. Our pick of mains is the chicken shish kebab which is thoughtfully pulled off the skewer and served with bulgar pilaf, marinated onions, red cabbage and a puddle of hummus. The chicken is moist and juicy with the right amount of smokey char.

If you have room for desert (it’s likely that you won’t) you have to try Katmer (no its not a type of kitty perfume), but a crispy pancake revelation. Golden flaky triangles stuffed with kaymak (similar to clotted cream), dusted with crumbed pistachio topped with a sphere of ice cream have us wondering why this dish and not baklava is the desert of the Middle East.

Above Par rises to the occasion in more ways than one. It has a thoughtful wine list – we loved the rich full bodied Punt Road Yarra Valley chardonnay along with a mighy fine old fashioned. It has attentive hospitality from Ozgur and delivers surprise after surprise with unique recipes passed on from their their mums and grandmothers.You can taste the history of hundreds of years and the diversity of dishes that often don’t get cooked outside of their native villages and towns.

We may not be sitting in Taksim Square after a night of partying, but this a wonderful Middle Eastern trip and one that honours both their family and delivers plate after plate of playful creativity. 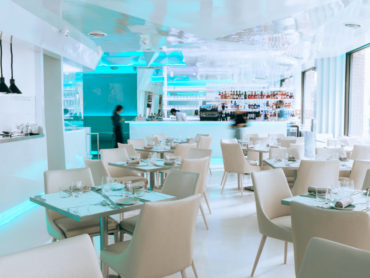 Take a Trip to Istanbul at Kepos & Co