Did you know that June 3rd is National Doughnut Day? It’s a beautiful world that we live in isn’t it. What more do we need than a day dedicated to round cake-like treats? While this day started as a fundraising event for the Salvation Army back in 1938, now the first Friday of June is simply about eating more doughnuts for doughnut sake. But where should you get your doughnuts? We’ve rounded up some of our favourites. The Grounds of Alexandria

Whatever you’re craving, it’s likely these guys have it. From plates of avocado with heirloom tomatoes and feta, to a bunch of flowers, they cover a lot of bases. And no surprises as they appear here, that also includes doughnuts. In a cart outside among the many spaces that fills this venue is where you’ll find the sugary treats. Plain cinnamon, Nutella, and jam and raspberry sugar are written on the blackboard menu. It all feels very old world. The name suggests these guys are serious about dessert. While you can anything from Nutella lasagne to rice pudding, we’re here to talk doughnuts. You can get cronuts topped with pretzels and chocolate, gelato moulded into the shape of a doughnut and served on a stick, or Nutella balls – fluffy doughnuts filled with hazelnut goodness.

With a heavy Asian influence, the menu at Devon on Danks is filled with items like yuzu curd, kewpie mayonnaise, and matcha soil. While you can start your day with a yogi bowl, that’s not what National Doughnut day is about. Indulge in a square Crème Brulee or raspberry cronut, or doughnuts ranging from chocolate, strawberry, and caramel, plus everything in between. While this place is more cronuts than doughnuts, it’s still a perfect fix. While flavours are always changing, you can expect the likes of Mango curd and Mandarin Meringue to Banoffee pie flavour topped with chunks of banana and chocolate. You can also dive into their full breakfast and lunch menu and take the cronuts home for later. It’s a choose your own adventure kind of place. Doughnut Time prides itself on handmade and small batch treats. Found across the country and in an ever-moving van, these doughnuts don’t last long due to the fresh nature of the creations. But you don’t need very long. You can expect anything from Nutella-filled doughnuts finished with cinnamon sugar to a Crème Brulee custard-filled spheres covered in toffee glaze, or something left of centre with the Tutti Frutti and raspberry glazed doughnut finished with Lego looking candy blocks. For National Doughnut Day, they’re going one bigger with their Limited Edition Gold Leaf Doughnut – a simple glazed doughnut finished with gold leaf. Because, fancy. These guys love nothing more than a doughnut with a side of hot coffee. Which is handy seeing as that’s what they do best. The coffee (usually Market Lane) is kept simple, leaving all the creativity for the doughnuts. Order a burnt caramel, fennel, sea salt creation, a cookies and cream filled doughnut, or stay simple with the cinnamon, cardamom, and sugar option. Cobb Lane is known for all of its sweet treats. Doughnuts being just one of them. This small space in Yarraville is the creation of pastry chef Matt Forbes. While pastries are worth the drive alone, you’ll also find an English inspired breakfast menu if you’re up for savoury then sweet. You’ll find creativity here like the raspberry, lychee, and rose doughnuts. If you’ve been looking at pictures of doughnuts on Instagram lately (just us?) you may have noticed that people have starting sticking syringes of sweet goodness on top of them to simply add to the joy. The people at Ascot Food Store are some of those people. Black Forest doughnuts sit comfortably next to raspberry and white chocolate, and even Golden Gaytime flavour. 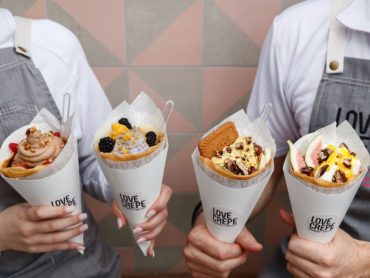 The new range of signature crêpes . Photographer: Steve Woodburn If you like your Nutella by the... 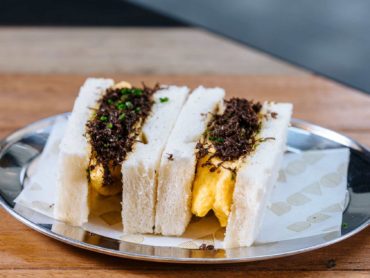 Get your Truffle fix at the Devon Cafe

Truffle Egg Sando The onset of winter brings coats out of the cupboard, warming cups of hot chocolate in... 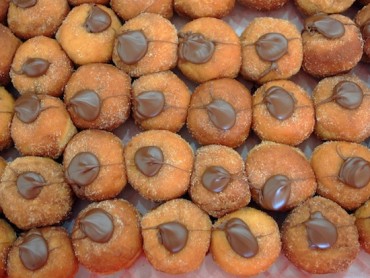 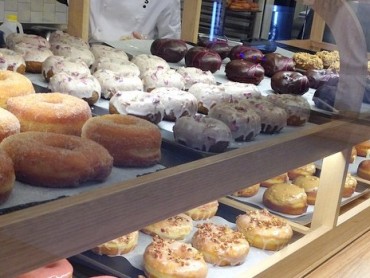 Delicious Doughnuts Are Just a Shortstop Away

A new doughnut café that knows a thing or two about round treats has opened on Sutherland Street in the... 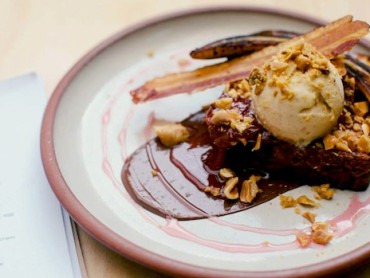 Devonshire Street just got a little more exciting with the addition of Devon Café – a knockout food joint...